Hard disks installable on loader 1.04b 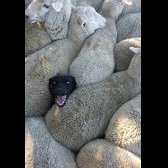