Input/Output error in data folders after an attempt to update

I don't know if this section is the most appropiate for this question. I got a failed migration (I rather say a big mistake from my side) when I was running the assistant dialog to go from 6.2 to 7.0. I didn't realize until the very end that I was running a clean installation so when the progress was starting I immediately interrupted it. Fearing the worst I switched loaders from redpill to jun's so now it's non-accesible, fair enough, since I think is in the limbo between 6.2 and 7.0 and it has lost all the configuration as it's prompted in the assistant.

I removed the RAID 5, compound of three drives and mounted apart and launched GParted crossing fingers that although synology is not accessible, the data is still there. Just mounted and this is the result (see attachment)

So "Archivos", "photo", "docker" and so on are the main folders where my data lives and whenever I try to access them I get what states there: `cannot access ***: Input/output error`

Doing so surfing around the web I found the command `btfrs scrub` and tried it. Apparently other filesystem like `ext` allows you to access the folders even though it could be corrupted, non the case for btfrs since this holds some metadata checksum in order to preserve non-corruption problems, so if there's no validation, you're not able to access the data. After running this command, I get no errors  but I still not being able to access these folders.

I know I know, great mistake but there's no possible way to retrieve the data at least and copy them to a spare disk? I was reading about running `btfrs repair` or another options such as `fsck` but these options are discouraged in terms that they work as a last resort... so just asking, any advices? Should I say good-bye to all my data? 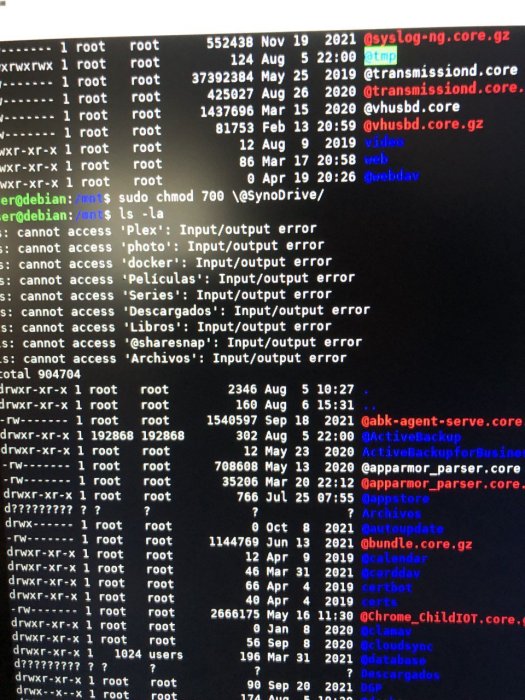 0 answers to this question