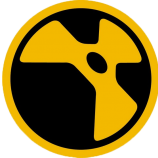 By Nightingale
January 28, 2018 in The Noob Lounge